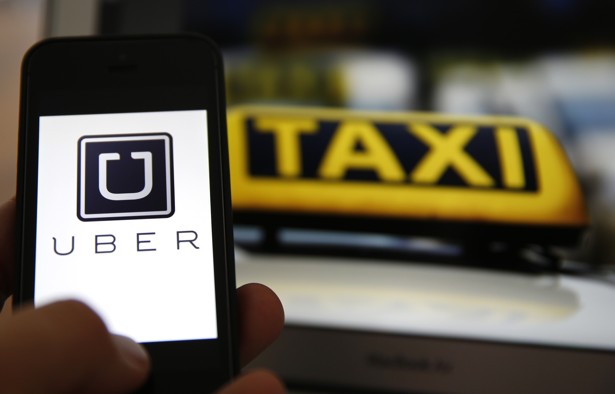 Sandra Levine had 27 tenants in her spare apartment this summer. Most stayed for two or three nights. Some stayed only one night. One blessed guest stayed for 10 days, which gave her a long break from washing the sheets and cleaning the bathroom. “It turned out to be a pretty good summer job,” says Levine, a preschool teacher in Boston. “There were a few weeks when we had people every night. That was really busy.”

It was lucrative, too. She charged three times what she would have for a monthly rental.

Levine and her husband, Sam, ran their rental business through Airbnb, a website that enables people to rent out their spare rooms, apartments, or even whole houses to travelers looking for an alternative to a hotel. The pervasiveness of wi-fi and smartphone apps now allows individuals to sell commodities like spare rooms or transportation that previously were relegated to licensed professionals. For some, Airbnb and the ride-sharing service Uber are moonlighting projects that supplement more-traditional incomes. For others, these new DIY services are full-time gigs.

Airbnb provides a neutral interface for managing monetary exchanges, but the actual provision of goods and services to the tenants is entirely up to the hosts. Levine initially hired a cleaning person to ready the apartment for renters, but she eventually wound up doing it herself. That saved money, but it also meant her schedule was erratic. On a few occasions, she had to rearrange her day’s plans because of a last-minute booking. Once, her husband forgot to black out a weekend when they were out of town, so she had to cajole her college-age daughter to ready the apartment when a booking came in.

Levine isn’t an Airbnb host anymore, recently opting for a long-term tenant, but she still doesn’t think of herself as a traditional worker. “I work a few days a week till 1:30, one day a week until 4. I’m not nine-to-five, and I’m certainly not eight-to-seven, like a lot of people.”

She is more normal than she thinks. Or rather, she is emblematic of the new normal.

In some industries, even the physical office is becoming antiquated, just like one-job careers and pension plans (remember those?). It can be hard to know when someone is “at work” or not. Soon that question may be irrelevant. When Levine is cleaning her apartment for her next Airbnb guest, she is working even though her primary employer considers her “off.” If she responds to a text requesting a room reservation while strolling along the Charles River, she’s both on and off at the same time.

Work happens everywhere and at all times. Human resources professionals have moved away from the term “work-life balance,” because it implies that there is a direct divide between work and life, and that work activities take away from life activities—and vice versa. “We call it work-life fit, work-life integration, work-life merge,” says Lisa Horn, congressional affairs director for the Society for Human Resource Management.

Managed competently, this new idea of the workplace offers greater freedoms for both the employer and the worker, and it can be a boon to productivity. But analysts agree that it hasn’t been fully integrated into work culture, and that can create tension. “Work intensity has ratcheted up. Workers are supposed to be available—or at least accessible—all the time, whether they’re at home or not. And yet we have this really outdated idea of nine-to-five,” says Phyllis Moen, a sociology professor at the University of Minnesota who specializes in workplace flexibility. “Some feel they have to put in face time. People would ask, ‘When do you leave during the day?’ And they would say, ‘After my supervisor leaves.’”

The increase in women in the workforce has been the most important change in employment over the last two generations, according to workplace analysts, and it has placed a new premium on flexibility. The term means something different to each worker and each employer, but sociologists say it can be boiled down to one essential component—a worker’s ability to control her schedule to accommodate needs outside of work.

Reasons for Working Less Than 35 Hours 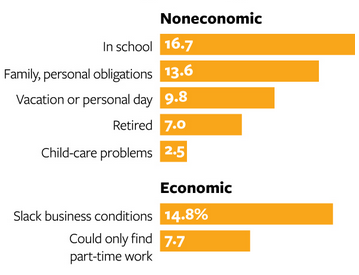 Many office cultures haven’t moved past the assumption that for every worker there is another person at home (usually a woman) who is taking care of the domestic aspect of the family’s life. But this Cleaver-like model hasn’t been the case for two generations. In 1970, two-fifths of married women were in the workforce and nearly three-fifths of single women (57 percent) were employed, according to the Census Bureau. By 2010, employment of married women had jumped to nearly two-thirds (61 percent), essentially on par with single women’s work rates (63 percent).

It’s hard to overstate how much an employee’s control over his schedule, even if it’s a small amount of leeway, changes the work experience. Almost three-quarters of adult workers (73 percent) said flexibility is “one of the most important factors they consider” when looking for a new job, according to a survey commissioned last year by the employment firm Mom Corps. (Other surveys put that figure as high as 87 percent.) Nearly half of the respondents in the Mom Corps survey (45 percent) said they would even be willing to relinquish some of their salaries for more flexibility.

Yet the survey also showed that some cultural barriers haven’t been fully dismantled. Almost half of the respondents (47 percent) said it would hurt their chances for advancement if they asked for more flexibility.

Horn says many employers want to try new ways of managing workers that are less focused on hours spent in a cubicle, but they are hampered by outdated labor laws. “Our workplace laws have not evolved. We talk about schedules and rigid scheduling,” Horn says. “What dictated that, believe it or not, dates back to the 1938 Fair Labor Standards Act.”

Meanwhile, a new level of uncertainty permeates the workforce. “We’re seeing an employment rate that is just a little bit better than it was in the depths of the Great Recession. We are seeing quit rates that are not very high still. We are seeing people saying in surveys that they’re feeling economically insecure. They are less likely to report that they are part of the middle class,” says Heather Boushey, chief economist at the Washington Center for Equitable Growth.

Employees now are less inclined to “unplug” for fear of being seen as unproductive and let go. And they may not be wrong. Managers are being asked to accomplish more with fewer employees. Production and service workers find themselves clamoring with their co-workers for more hours as their managers try to schedule the exact amount labor needed—and no more—to accommodate their production or sales needs. Store managers are afraid to post schedules too far in advance in case the sales patterns shift without warning.

“You’ve got your BlackBerry, walking around your store, and you’re looking at your sales ratios right then,” says Susan Lambert, a University of Chicago professor who studies hourly work. “Front-line managers are really held accountable for staying within hours. They get in trouble for even using a few hours more than what they’ve been assigned.”

Just-in-time management makes for precarious work schedules. Two-fifths of young workers in nonsalaried jobs (41 percent) and nearly half in part-time jobs (47 percent) say they learn their work schedules less than a week in advance, according to research recently published by Lambert. That can wreak havoc with their lives, particularly if they are juggling school, second jobs, or child care.

Retail workplaces also tend to fluctuate wildly in terms of employees’ time on the job, which makes personal budgeting difficult. According to Lambert’s research, 90 percent of food-service workers and 87 percent of retail workers had hours vary widely within a month, many working half their usual hours in a given week.

“There are not enough jobs at the bottom. It’s harder for them to have any leverage because employers can just hire someone else,” says David Grusky, a Stanford University professor who focuses on economic inequity.

Grusky is concerned that new innovations in work—from telecommuting to on-site child-care centers to productivity-oriented payment systems—risk leaving lower-level workers behind. “When we talk about work redesign, we always think about the higher end,” he says.

Horn says human resources managers in the manufacturing and service sectors, who use a lot of hourly workers, struggle with how to provide flexibility. She advises them that flexibility looks different in their industries, but it is still doable. “For an hourly worker, in particular, a little bit of flexibility goes a really long way. For them, flexibility may come in the form of stepping off the production line at 3 p.m. every day to make a phone call to make sure their kids got home,” she says. 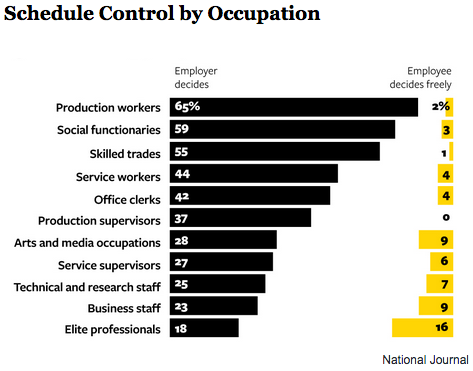 According to Horn, forward-thinking employers are as concerned as anti-poverty advocates about the unintended impact of scheduling modernizations on their workers. Several of SHRM’s 2014 award winners for workplace innovation won recognition because they set up programs to combat overwork. “How do you turn off and avoid burnout,” she says. “Send the strong message, ‘It’s OK. You are on vacation. You do not need to be sitting in on the conference call.’ “

Sociologists say the true nature of work is tremendously difficult to assess with any scientific clarity. Lambert, for example, is frustrated that her research on precarious work scheduling is limited to workers ages 26 to 32. That’s the only data out there; it wasn’t until 2011 that a census survey of youth included a question about scheduling.

Even without hardcore scientific proof, however, it is apparent that work will become more project-oriented and multifaceted over the next generation. Millennials can expect to have several careers, perhaps even at the same time. Retirees will continue to reinvent themselves with second careers. Some workers, with the help of Web inventions like Airbnb or Uber, can strike it out on their own. These changes are inevitable and even welcome, says Moen, as long as workers aren’t left out in the cold.

“It’s going to be project work. We have to figure out how to have protections around that so when people are out of work, they get some kind of renumeration,” she says. That’s a lofty goal, but not an impossible one, considering that it is on the forefront of both employers’ and employees’ minds as they struggle to adapt to the new economy.