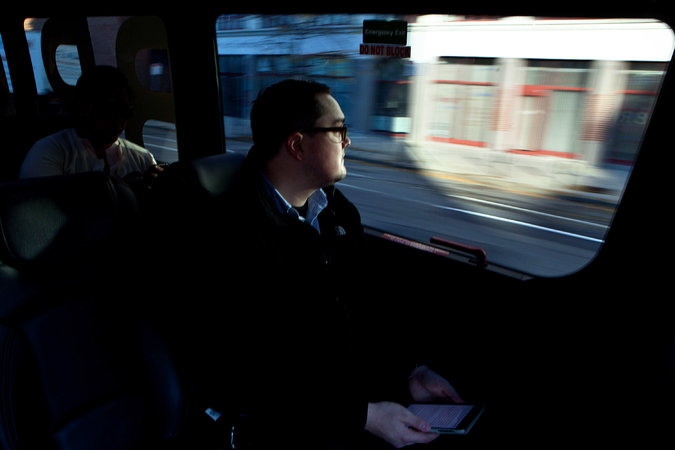 JACK DeMANCHE’S commute to work was like many in the Boston area — long. But that was before Mr. DeManche, a digital strategist for an advertising agency, began sharing a ride with other commuters with the service Bridj.

Now, the hourlong trip from his home in Brookline to his office at the Boston seaport has been cut in half. And at $70 a month, he estimates that the trip costs less than using the Massachusetts Bay Transportation Authority.

“The ability to book a week in advance is a time-saver,” he said. He is guaranteed a seat, he can use Wi-Fi on board and the van drops him off a block from his office.

Bridj is just one of the new services that are helping to redefine car-pooling.

Long the province of shift workers headed to the same factory and suburban parents who drove children to after-school activities, car-pooling is getting an urban makeover as technology becomes more prevalent and a younger work force relies on mobile devices.

“This is the most exciting development in car-pooling in decades,” said Joseph Schwieterman of the Chaddick Institute for Metropolitan Development at DePaul University in Chicago. 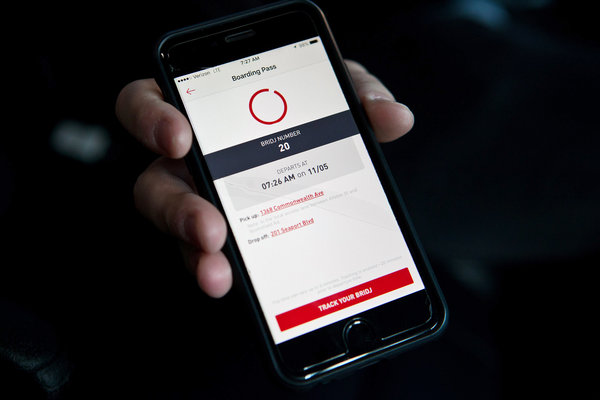 Jack DeManche displays the app that he uses to access the Bridj bus that he takes to work.

In the last 15 months, Uber and Lyft have introduced shared rides in Austin, Boston, New York, San Francisco, Los Angeles and Washington through UberPool and Lyft Line. Cars or vans sporting names like Split (sections of Washington only) Via (sections of Manhattan only) Bridj (rush hours in Boston and Washington) and Carma, which also runs in Chicago, Houston, San Diego and Seattle, also compete. Some ride-sharing apps are available internationally as well.

The new services come after a long decline of car-pooling. According to a report released by the Census Bureau in August, car-pooling fell to a low of just over 9 percent in 2013, the last year for which figures are available, from nearly 20 percent in 1980. About 76 percent of people who traveled to work drove alone in 2013, according to the report.

Christopher Koopman, a research fellow at the Mercatus Center at George Mason University, gained firsthand experience in the sharing economy. After landing at Reagan National Airport in Washington, he considered the traditional options: taking a taxi or riding on mass transit. In the end, he used UberPool, a recent venture by Uber that offers shared rides on demand.

Although the trip to his office took a detour to a hotel to drop off his traveling companion, the price of the ride fell to $8, from $12 if he had ridden solo.

“It was cheaper in terms of cost, slightly more in terms of time,” he said of the 15-minute ride.

No one riding in these vehicles would mistake being on a fixed transit route. Algorithms match cars with riders going in the same direction. While UberPool and Lyft Line offer door-to-door pickup, Via and Bridj require passengers to walk a short distance to catch transportation. Bridj, for example, operates during rush hours and creates pop-up transit stops to meet demand, according to the company’s chief executive, Matthew George.

The praise isn’t universal. To Mr. DeManche, Bridj’s algorithms aren’t as sophisticated as he would like. “The tech system is not able to understand traffic patterns,” he said. “It can’t predict traffic and volume of traffic.”

Mr. George said in an email that Bridj’s algorithm took into account factors like traffic and how long it took to pick up other passengers. 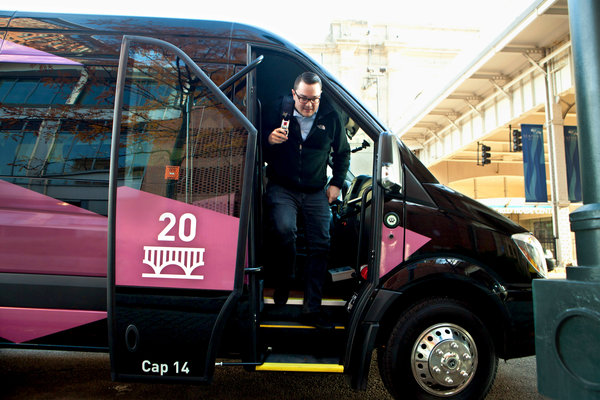 Jack DeManche gets off the Bridj bus he uses for his morning commute.

Split, the Washington service, uses its algorithm to calculate the most direct route based on the destination of passengers.

“You tell us where you are and where you are going,” said Split’s chief executive, Ario Keshani. The company charges a $2 base fee and $1 for each additional mile.

Other services may be cheaper and cover a wider area. Carma’s chief business officer, Paul Steinberg, said that service charges $1 for the first mile, 20 cents a mile until 15 miles and then 8 cents thereafter.

Even if passengers find a ride-share service they prefer, its success is not assured, as users of Leap in San Francisco recently discovered. It charged riders $6 to get across San Francisco. Buses were luxurious, with wood-trim interiors, individual USB UBS ports and Wi-Fi. But in May, shortly after it began operations, Leap received a cease-and-desist letter from the California Public Utilities Commission. The company did not comply with the conditions of its original approval and is now in bankruptcy.

Experts say this lack of collaboration with state and local officials may be the exception.

“Electronic car-pooling is getting tremendous adoption among cities open to allowing these services to operate to try to manage congestion,” said Sharon Feigon, executive director of the Shared-Use Mobility Center in Chicago.

The phenomenon is developing its own etiquette. This includes being prompt, keeping cellphone conversations to a minimum, steering clear of political debates with riding companions and making sure any in-car snack does not smell or make a mess.

Whether car-pooling will expand to other cities is unclear. “There are only a handful of cities where people live and work along densely populated corridors,” Mr. Schwieterman said. Bridj, however, said it had plans to enter Kansas City early next year in a partnership with the city.

Others have doubts about an expansion as well. “Employment clusters are less geographically concentrated than they once were, so people who live near one another are less likely to be headed in the same direction,” Brian McKenzie, the author of the Census Bureau report, wrote in an email. Still, smartphones have presented a more efficient way to organize commuters based on where they live and work.

Mr. Koopman sees an upside. “I can come and go as I please, without it being the product of someone else’s collective schedule,” he said.